Gaelic Fusion is a metamorphosizing band of long time and up-and-coming Fairbanks Celtic musicians. They often also play in other bands, but get together to have a good time and mix it up. Today’s Gaelic Fusion is currently composed of Rohan Weeden on fiddle and Gary Newman on guitar. Max Newman on the left joins us when we can bring him home from Boston. We play a lot of Northern music – French-Canadian and New England styles of traditional music as well as our standby Irish and old time music. If you’d like to have a fun bunch of folks play for a dance, wedding, wake, or just for fun, we’d love to do it – just contact us. (907) 488-2001 or gary(at)alaskafolkmusic.org. 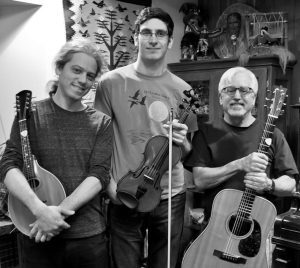 You can listen to some first takes of their music:

Beauty of the North – A lovely Strathspey that Rohan plays

The Rambling Pitchfork-Four Courts-Salvation-Reel – a traditional Irish jig paired with a couple of fun reels, Max is on mandolin

Saari & Kristen – Max is on mandolin, playing a waltz he wrote for a cousin

All have music in their lives still with two of them full time trad musicians.

Gaelic Fusion Members Past and Present

A calendar for your convenience